NDIAA Female Athlete of the Year for Division 2 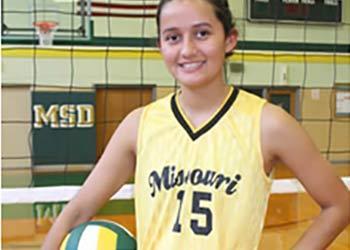 Congratulations go out to her as she was named the 2016-2017 National Deaf Interscholastic Athletic Associations (NDIAA) Female Athlete of the Year for Division 2. They had several excellent candidates and recognize her for her wonderful contribution to MSD’s athletic teams. She graduated in May but was involved in all sports at MSD and a National Honor Society member, while maintaining her GPA. Elizabeth played all positions in Volleyball, Basketball and Track. In the 2016-2017 school year she earned 115 points in her track season and earned 40 points at our GPSD tournament (1st place in each event, 1600 m run, 200 m dash, long jump, and high jump). In her Basketball season, she earned 173 points and the All Star medal at GPSD. We are so proud of her and her accomplishments!